Looking at the way in which ideas or themes recur and evolve and can be explored in a range of media and methods. Seeing how a wide range of media and starting points can be linked through a common purpose which is revealed by continuous analysis.

I first came across the Limitary patterns idea after reading  C. Herbert Gilliland (1978) in an internet search. I was looking for connections to Milton’s Paradise Lost. The idea of exploring patterns related to limits and boundaries in a visual form teased my imagination.
I linked this image of fenced maram grass at Blakeney to these words;
Confusion heard his voice, and wild uproar Stood ruled, stood vast infinitude confined,…
None can love freedom heartily, but good men; the rest love not freedom, but licence.
John Milton
The motive behind the original photograph was the pattern, tone and texture of fence and grass. The text suggests wild and infinite nature tamed and held back; also mans’ wild and natural urges similarly tempered. The grass would (metaphorically) seek ‘licence’.

EXPULSION : THE FIRST MORNING OF OUR WORLD  martin Field 2012

Part of a pastel drawing from 1990 ‘Natural History’ reminded me of the picket fence and this then became a recurring motif in the work that followed.

It (the fence motif) is evident  in a piece from 2014 ‘A Natural History’ the fence marks are made laterally across two canvasses which were designed to link on both edges giving two configurations for display. The edges of the work and the meeting of the parts of the image becomes another limit and relates to repeating patterns. 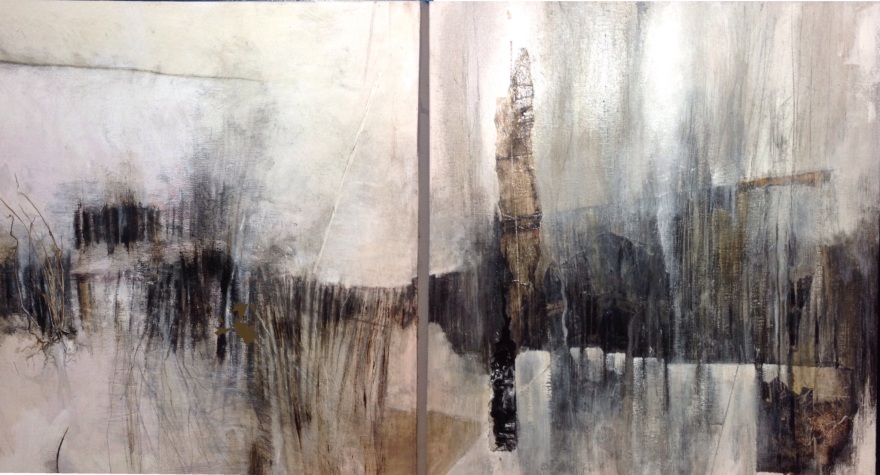 This idea was expanded in another piece from 2014 ‘Hidden Repeats’. The motif is taken directly from the pastel drawing, digitised, printed and embedded into the mixed media.
The other part of this image and more detail of the way in which this piece repeats can be seen at https://martinrfield.wordpress.com/2014/10/23/hidden-repeats/ 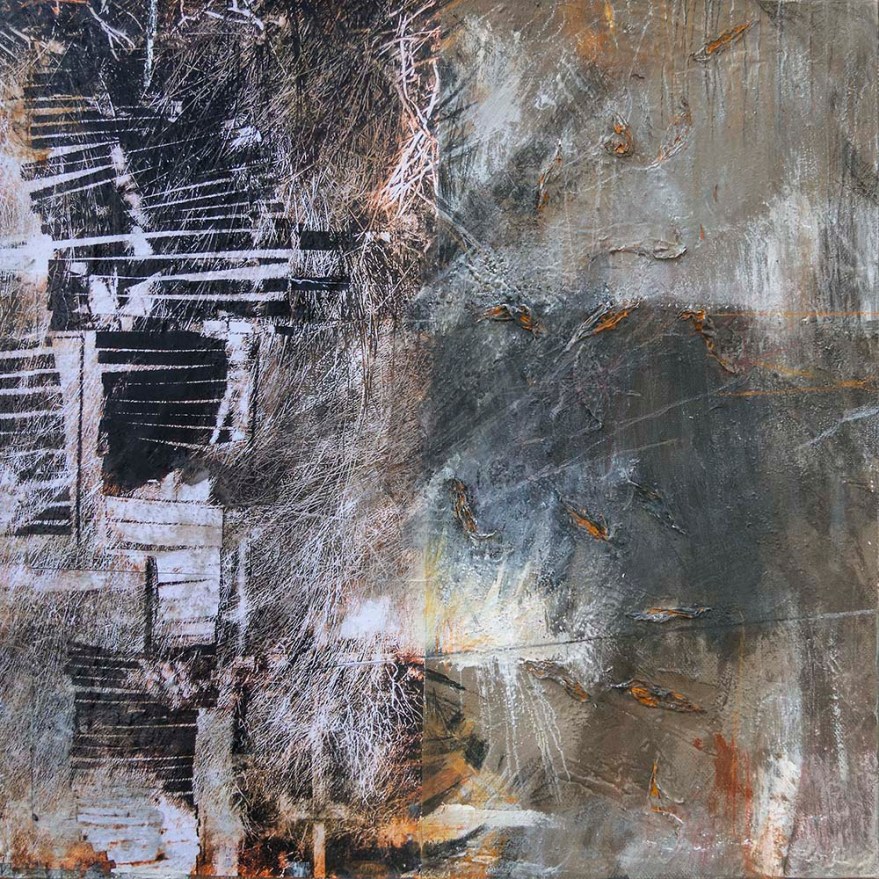 Binary Impulse: The fence motif re appears in this piece. The other shapes begin to represent flags and banners. These are symbols of allegiance and by implication separatism. They are also usually covered in pattern. Given the major political events of the time (Summer 2016) this is perhaps about choosing sides. The referendum was a binary decision and prompted the use of the term. 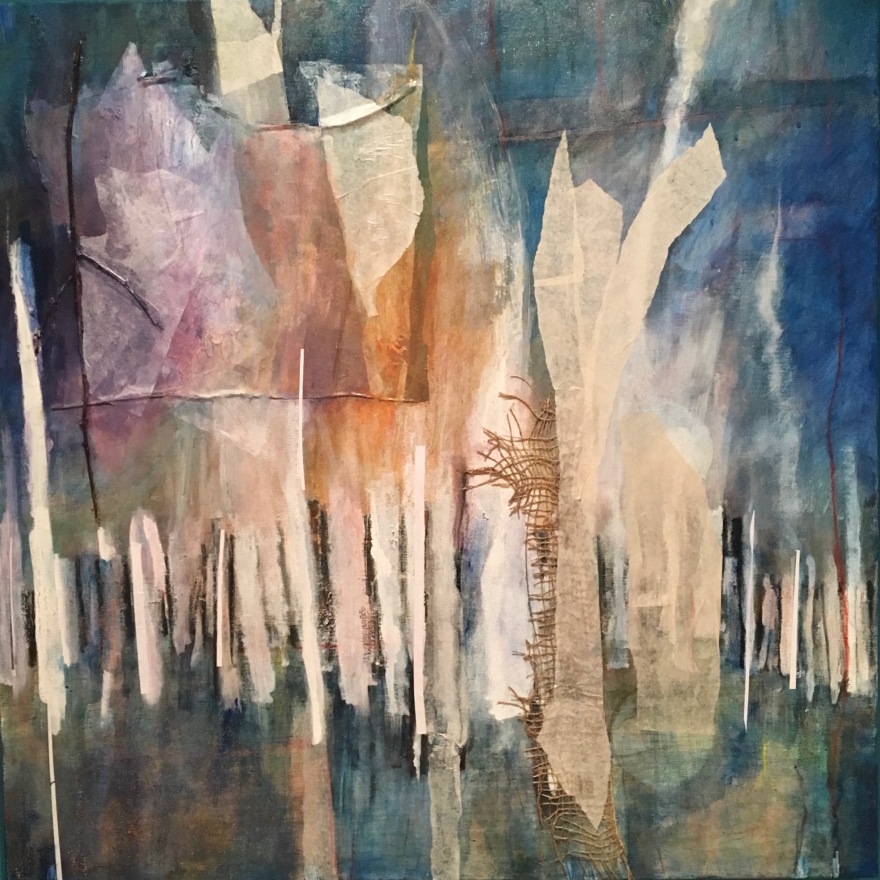 The next development is a return to the double linked canvas. Two 1m square canvasses link on both outside edges giving two configurations for display. Hessian scrim becomes a floating and distressed barrier across the piece. There are only two outcomes of a binary decision. No regret, no status quo.

This image was then digitised with further elements added. the new shapes are patterns for mens’ suits and the other element is the fence from the original photograph from Blakeney. The ‘men’ are neither in front of, or behind the fence. Nor can they sit on the fence. This piece is purely digital. The enhancement possible using digital montage methods added vibrant colours and complexity. This prompted further iterations of the new pattern motifs.

The photoshop work which used photos of the painting with found patterns for mens’ suits was the printed out at the correct scale (to collage) using tiled A4 sheets and layered into the acrylic medium. Blending colours added with paint and crayon helped merge the added material even more. The final piece is a result of several cycles of imagery being reused, layered and sampled.

To begin with the idea was connected to Paradise Lost which deals with Heaven, Hell, Eden and Earth. A vast range of choices seemingly reduced to good or bad with the edges of those two opposites cleverly blurred. Since then I have found connections to the landscape, to composition and to recent momentous political events. We seem to exist in a binary paradox. Can all things be seen in the context of limitary patterns?

Another recurring motif and more work across different media and practice.

This painting was an interpretation of a photograph (see below) taken at Lawrence Field above Hathersage looking down into an old overgrown quarry. 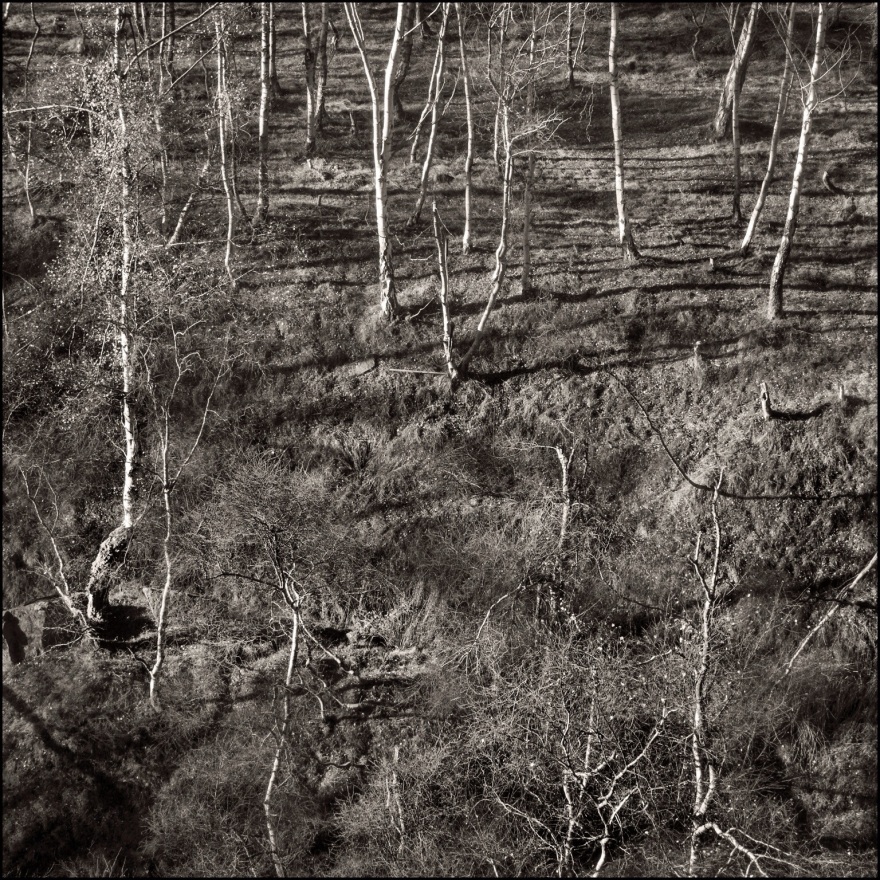 Although different to recent work the idea was an old one.
This is from a post from April 2010 shows the same preoccupation.
“Ever since seeing a shot of aspens by Ansel Adams I have found it difficult to resist the temptation to shoot silver birch trees when I see them. The white trunks, stark against a dark ground provide so many possibilities for picture making. Another favourite birch image is by Klimt. He uses the linear rhythm of the sapling trunks but also makes merry with the golden leaf fall. His composition deliberately flattens the space whilst accurately recording the perspective of the receding trees. A harmony of colour and texture that collaborate to produce balanced ambiguity of depth. Paradoxically, the more we see of others’ work and absorb it to learn from, the better equipped we are to develop our own vision.”

Below is my image followed by those of Adams and Klimt. The theme is also apparent in my iPad drawing.

The ‘Woodland Rise’ drawings explore the idea of a flat ground with trees in depth as do the ‘Early in Late Autumn’ drawings.

I often pursue the idea or theme that is current in my mind by using any and every method and medium.